This house was built after World War II when the soldiers were coming back home and were influenced by the architecture they saw in Europe.  The original style of this home may have been considered closest to “French Eclectic”, but was probably a combination of several styles.  My goal will be to update it to look a little more like it initially did. 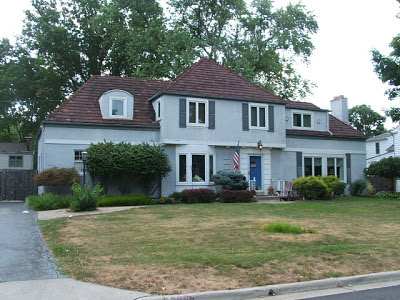 To start with, the existing house was probably just the center portion and right side; not the portion at the left.  It appears to have been added onto and altered quite a few times.  Luckily, though, the original material of clay tile is still intact!  However, the colors and details of everything else have been updated in a way that does not compliment the original style. 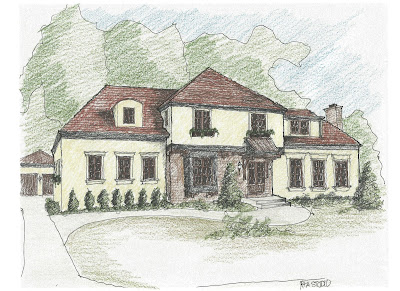 Overall, this house needs to be composed of warmer colors than it is now…. A warmer color stucco, dark stained brackets, and dark brown windows.  This will allow the house to fit much better with the roof color.


I also think that the window trim should blend in with the stucco more, so I propose doing a product called Canamould which has the same sort of texture as stucco, can be covered with stucco, and adds a lot more depth to the windows.  I’m also going to incorporate a dark brown metal roof and window boxes; I always like to have a few different materials to add some interest.  Also, I’m going to replace that dated angled bay with a much more stylistically appropriate box bay.

If YOU have a Frumpy house… Email me a photo!
I will occasionally select a photo from a reader to make… FABULOUS!

Send your photo to: jamee@rtastudio.com
Email ThisBlogThis!Share to TwitterShare to FacebookShare to Pinterest
What is this about? From Loafers to Pumps - A Makeover